My question for this week:  who polishes David Cameron?

A lot of guys follow him around, and they are supposed to be security, but I’m prepared to bet that one of them is secreting a choice of chamois leathers and a spray can of Mr. Sheen.

Now I come to think of it, why let it rest there?  I mean, everyone acknowledges that the original Ed Milliband was made by Aardman (although rumors he is Wallace’s lovechild are probably unfounded) so someone must be there to touch up the plasticine, right? 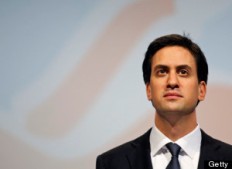 Whatever we may think of their morality, or of their qualities as people, those who rise to the top in public life do work extremely hard.   Every waking minute must be time-managed; and in this news-hungry generation image management is equally vital.  So, with apologies for my cynicism, I refuse to believe that 7 a.m. at the Cameron’s bears any relation to breakfast time at my house.

Upstairs?  Well, yes, you can picture some normality there:  wife Samantha telling Dave emphatically that if he must get up at this hour he can fix his own bloody tie, perhaps – but thus far and no further.   If you are due to meet the President of France at 9.00 o’clock an absence of underpants because they’re all in the wash could cause a national crisis, and as for the kids at breakfast….

Imagine the damage one exuberant spoonful of flying jam could do, or the under-confidence engendered by riding your bike commando through London Traffic, rabidly pursued by squadrons of paparazzi eager for the split seam that could end your political career?

No, somewhere behind the door at number 10 there are ‘people’ who ensure that sort of thing can’t happen.  I can imagine them waiting for their Prime Minister to emerge from his private accommodation with a shiny photograph in their pockets, ready to see the image perfected before he is allowed out of doors.

Why is this aspect of public life so important to us, the poor worker bees?  I suppose because at a stroke it invalidates the ‘just like us’ element of democratic leadership.  I recall at one time being told that Prince Charles has a personal valet who helps him to put on his trousers in the morning.  If true, presumably such a person must be in a position to check on the underpants situation at the same time.  But how personal can such an odd relationship get?  And to be so entwined in the lifestyle not to see it as odd – that is a far cry from the daily affairs of the people in the street.

Lady Churchill once said of her husband that he never went shopping; that he would have had no notion how to conduct himself in a grocers.  Our current Chancellor of the Exchequer Gorgeous George Osborne is a member of a millionaire family and he, like most members of the current government were raised in the tradition of Eton and Oxbridge.  They grew up with the ‘fag’ system and nothing has really changed since.

This is the essential paradox of democracy:  that those who rule us are not, in essence, democrats.   They may say they are, they may lay claim to democratic principles, but they live according a much older code – that of feudalism.

So spare a thought for the ‘fags’ – the people in the background who should unify us, yet somehow keep the separation intact – who do the unseen jobs.  The great unthanked.  They are untouched by the media, yet they make the Great and the Good much greater and hopefully quite a lot gooder.

This is my quiet little round of applause for them, the silent ones.  For the man who plugged Richard Murdoch into the mains this morning, for the woman who does Nigella Lawson’s washing up, and the little chap who lurks inside the traffic lights in our town centre just so he can turn them to red every time I approach them.