I was born in a small fishing port, at the mouth of a river which gave its name to a moor – a wild place. Dartmoor is a lofty range of misty valleys and veiled heights, of bracken and bogs and heather-clad slopes – a haven once for brigands and thieves, untamed men who served in Drake’s navy and pirated the seven seas.

No longer. Though some who perch on Dartmoor’s windswept fells might insist the wild 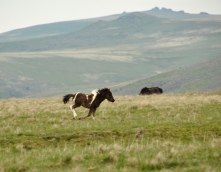 men are still with us, the only manifestation of their criminality is likely to be car theft. The spirit of the moor, though undefeated, is buried deep, awaiting the next turn of history.

The River Dart retains some fame as host to Dartmouth Naval College, which ensures that our smattering of gun-boats is jealously manned, while Dartmouth itself, town of my birth, retains no fame at all, even though Thomas Newcomen was born there, a few centuries ago. Thomas who? Thomas made the first workable atmospheric engine, progenitor of the steam engine. His beam pumps were used everywhere a mine needed drying out, back in heady eighteenth century times. Dartmouth is the site where a ferry crossing once linked the main arterial road from the Devon coast to the rest of the peninsula.

Once, not now. The old ferry remains. The queues for it are as torturous as ever, but its users are there for the tourist experience, rather than an urgent need to reach Plymouth, or Truro, or St, Ives. The spider of communication has spun her web across these traditional routes, keeping them cocooned while she sucks their juices. Is this a bad thing? I don’t know. It is progress, and one should never question progress.

Although I have returned there now and then I have no early memories of Dartmouth. Nor do I recall those of my infant years which were spent in Paignton, a neighboring Devon coastal town. My first childhood memories are of Exeter, Devon’s capital city, and from there my life’s journey led me through different episodes across the southern breadth of this land – Somerset, Dorset, Hampshire, Sussex, Essex, London. I have been, in short, something of a gypsy. And in all my years I never kept a friend or found a home.

Instead, a peculiar thing has happened, something that I know I find inspirational and perhaps inspires the writer in all of us. I have made a home in me. My imagination is my caravan, my mind is my world. I rarely dwell upon the past. I will not share it like a poet over a pint of beer or belabor it as a fellow traveler upon a bus journey of tedious reminiscence. I commit it to paper instead. I do not lack for company, for whenever I need a friend I can find one on a white sheet of A4. If I want a memory to share I can find that too, simply by turning another corner in my brain.

Yet the worm will return to eat its own tail in the end. Somewhere in my psyche there must be a predilection for those open moors and wind-chilled heights that were my near neighbors in infancy. Certainly I am never happy in the confinement of a city – I hate the taste of traffic in my air. This may be why I live where I do, at the place where the caravan stopped; where the wheels finally fell off, if you will. But it may also be true there are stories in Weardale’s wild fells, and a voice that cries to be heard. 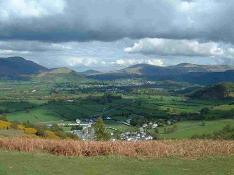 Wherever margins exist tales lie beyond. In this crowded land the taint of man adventures in high places at his peril. Where he dares go, there the wild wind and the scoured clay will whisper secrets to him in the night, will scare him with demons in the cold snow, murmur the quiet suggestions that can turn his mind. These things are the province of real men; men with some pirate still in their flinted souls, who grow up to talk with close mouths and see with narrowed eyes; who dress with no obedience to season, are slow to speak and quick to judge. Their intimacy with the land is absolute and harsh, a relationship some might consider abusive.

Although Dartmoor still harbors a few such men, there is no place for me, no home to which I would want to return. City dwellers have driven Devon men from their land, inflating house prices and bludgeoning a hole in the natural environment, squatting in triple glazed pods defiant of nature. Wherever these people reside, the spirit of the moor is a recluse that is only rarely seen. Not that Weardale can lay claim to status as the last wild place, or presume to Dartmoor’s natural beauty. As our land becomes more crowded wealth spreads across it like a disease, but the worst effects of skin rash have not reached Weardale – not yet.

So that jaded virginity, or accident of chaos, or fate, has led me to settle here, amid the ghosts of a millennium and more. For near to twenty years now it has been my home. I have put down roots; strange to me, in the soil of so much history I may never have time to tell it all. Once and again, though, I may risk boring you with Weardale tales, and I hope you will tolerate my slavish devotion to this place.