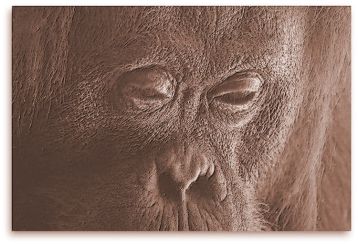 Some time ago, in a book called Hasuga’s Garden I wrote a chapter or two about the Miroveti, a species modelled somewhat (though not entirely) upon the Orang-utan of East Asia.  They appeared again in the Hasuga sequel ‘The World-maker’s Child’.  In Hasuga’s story  the Miroveti were not apes – they were an experiment.  I can say no more than that without ‘spoiling’, so I’ll let them introduce themselves to you, if I may.    I always had the feeling I sold them short – so maybe this is a beginning and there will be more, I don’t know.

It was somewhere along this trail, he remembers.  Somewhere near.    The creature is old, his sand-blond hair near turned to white, yet his memory still serves him:  it was here; just here.

He casts about him with myopic eyes for any sign that might betray the place, but that which he seeks is small; the mosses conceal it as they do all things: the grey, grey mosses that clad the land, stretching away to either side unceasing, and there is no undulation or interruption.  Nothing.

Yet it must be here – it must!

Of the Miroveti, the haired ones, he is the eldest.   When his friend Essata passes he will be alone of his generation upon this wild earth, among these tangled ruins of the Last Experiment.  A glorious vision of the Forefathers reduced to impenetrable overgrowth, a final hope of a future, when this land might become a home for his fellow creatures, dashed.   Even the trails the Forefathers seared with their staves of fire are cold and soon the few survivors of his species will be too burdened with years to clear them.  The moss will take them back.  In the end, the moss takes everything back.

Above him, the sun has lost its fierce edge.  The time of Making is near – this thought spurs him to search with renewed urgency.  He combs the dense growth beside the trail with his long fingers, oblivious to those poisonous spores that float into the air when his touch disturbs them.  It was here – he has probed for hours now, undeterred because he knows for certain it was here!  He hurries, old bones aching, breath short.  Time is short.

So small it is, that even with his finger right above it he almost misses the speck of nature he seeks. Spying it there, almost buried, at last, a tiny spark of joy warms his failing heart, and he gathers up a little grain of life, clutching it to his breast.

A glittering thing it was when he dropped it so carelessly on his way to his first Making, all those years ago.  Then he could not take time to recover it because the moment of Making was upon him.   After, as his colony mourned another failure, it was forgotten.  Then, it shone; but then there were so many, many bright life-germs to collect, to nurture.  And so he left it, neglected to recover it.  Through four Makings since that day, this minute speck has waited for his poor inadequate brain to remember until now it is dulled and black with neglect.   But today is his last Making and it is all he has to offer to the bowl. Today is the time of the black sun and the hour.  This is his last chance to keep the appointment it has missed.

He forces his stiff old legs to run, skipping over the root fibres that have begun their destructive work on the trail that leads back to his settlement.  He must reach the Great Bowl of oak cork that stands in his village compound in time to make this final, small offering. The signs in the sky are converging, the light in the North is dimmed.   At an appointed time Sun and Moon will be joined and the auspices set.   Then all the elements will combine to raise a Creation Mist in the GreatBowl and those who have offerings must cast them into its swirling depths.

As he hastens, a voice is speaking to him, urging him on.  Thoughts inside his head are finding shapes, pictures he can understand; almost as though the weak and sickly thing he carries is alive still, and insisting.    Here, where the water passes, are twenty or moss-thatched hovels where his colony – the very last of the colonies – resides.  Once this place would have been alive with his golden haired brethren; females fashioning food from moss root, children playing and squeaking their delight in the dying sun.  All are deserted now – all but a precious few huts at the village centre, poor shelters gathered around the compound where the scaffold of the Great Bowl sits, and no children;  no children anywhere.

It is a pitifully small group that is gathered about the Bowl.  They climb the scaffolding to its edge, casting their offerings into its depths where once, the Forefathers had promised, their prayers would transform anything that still held the germ of creation into brave new life.  Once, they had eagerly explored the rocks and crannies of the upper land for jewelled stones that might bear the germ, but of all their bright prizes nothing was ever found that would fulfil the Forefathers’ prophecy.

Now, all faith is lost, all hope gone.  Offerings are of small, random things, mostly household or grooming items like moss-stem combs or clay effigies; entreaties to a compassionate god for a miracle, but nothing that lives, or could inspire life.  Only the moss lives..  Motis is there, with a wall art she has saved, Hada offers a prayer to aid his handcomb on its journey, as poor, mad Ethela comes forward in that wild flailing dance of hers, bearing some trifle for Making.

Essata sees the old one come, and even from a distance he can discern the sadness in his eyes.   They greet each others’ thoughts, and the mind-picture Essata composes is of failure and old age.

‘We are both old, and this is the last Making we shall know’.  Their pictures agree.  As they share the minds of the others who stand by they can see no chance of success.  Although some, Ethela for one, will live to another Making yet, no-one has anything to give.  There is nothing here that will begin the great regeneration the forefathers envisaged.   Perhaps there never was.

The old one lifts his foundling seed to the sun and makes his prayer.  In his turn he will cast it into that strange and unexplained soup that stirs like glutinous fog within the bowl, and he stands in line – so short, so short a line.  There is a ladder to ascend, six steps, no more.  A platform to traverse, a place where the elbows of his long arms may lean above the green mist.  There, in the tradition, he raises it, that frail, failing seed, towards the sun one final time, one final prayer.  As he does….

In the heavens, the moon has drawn across the sun in full eclipse.  In his grip, the little spur of life leaps – yes, leaps in his hand!  He has no time to cast it in, for it has gone.  It is already within the bowl amid a maelstrom, turning and sinking.  But no matter that it spins and is drawn from view, it speaks to him; it speaks of the water that runs, of the dark matter that gathers at the water’s shore.

In wonder, he steps back, forgetting where he is and nearly falling from the platform to the hard clay of the compound below.   And behind him the Miroveti have paused to wonder too, for the behaviour of the old one is strange.  They cannot see his gift from so far away, they do not know why he starts and stumbles in such fashion, but his mind pictures tell them something extraordinary has happened.   A moment now gone.  The mists settle once more and three Miroveti who remain clamber sadly up to make their gifts.  Mad Ethela is the last.  She makes no prayer, but casts her morsel with a thrusting motion that almost takes her with it into the mist.  The others watching gasp their disapproval for her blunt hand touches, is even lost for a second, within the swirl.  To touch the mist is a sacrilege, but she is only mad Ethela after all – she is forgiven.

That night the old one sleeps uneasily.  He dreams of the running water that passes the colony, and the dark deposits it leaves.   An oddness in his mind has told him many times that he must learn about the water – from whence it comes, where it goes.  And he knows that dark matter well, for it gathers where the watercourse is wide and lazy, where a spur of rock deflects it from its journey.  When morning comes he rises early, eager to see the rising sun and glad that it is normal.  The eclipse that heralds the time of The Making has passed.

He walks a while about the village, seeking remnants in empty huts that he can brew into food.  As he forages and explores, Essata joins him, for they are firm friends.  So it is together they wander at last into the compound and together they see…

Many suns pass before the tiny green shoot is more than a sapling, and fit to stand tall above the tangle of the moss.  There are wild moons, and days when greyness gathers in the sky, but still the new  thing thrusts its roots into the dark matter from the river’s edge, and drinks the water from the river, and grows.   It grows strong and tall, unrecognizable from that first green frond that greeted the old Miroveti on that first morning after The Making, standing proud above the rim of the Great Bowl.  Before the old ones go to meet their own maker they will see its first children, hanging rosy red from strong, youthful boughs.  Eyes shining with hope will watch the clippings that they take grow healthy in their turn, and willing hands clear the moss to make a place rich with dark silt from the running water, fit for an orchard to grow.

Only mad Ethela does not join them, but sits instead within her moss-roofed home preparing, year after year, the little dark ovals of eggs she found asleep in the silt of the upper waters, and those tiny swimming seeds that clung to her fur when she touched the swirling mists within the Great Bowl.  Her poor twisted mind insists these will have meaning, and she will cast them into the Bowl, when the next Making comes.

© Frederick Anderson 2016.  Unauthorized use and/or duplication of this material without express and written permission from the author is strictly prohibited. Excerpts and links may be used, provided that full and clear credit is given to Frederick Anderson with specific direction to the original content.

19 responses to “The Making”